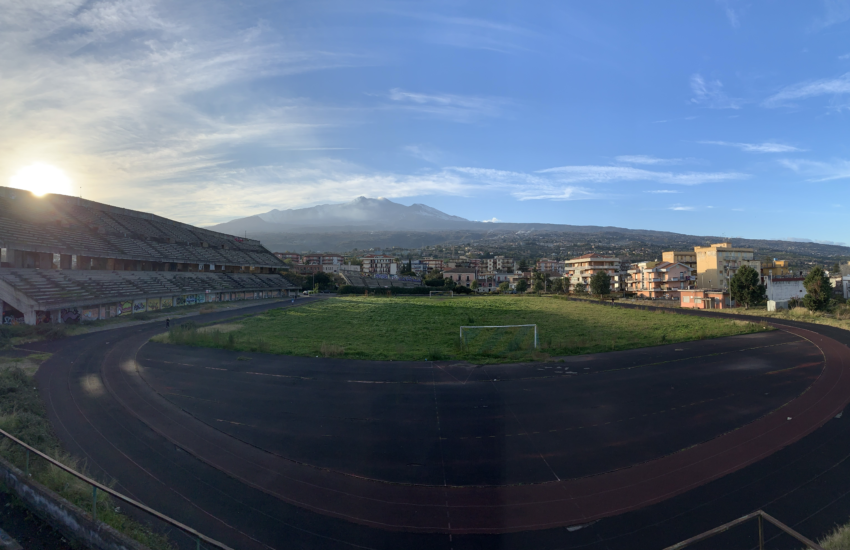 If this doesn’t become the top-most running-related post on an abandoned polo track in an outskirt city of Sicily, then I’ll have failed. If you’re a runner in Giarre, then I hope this info on Giarre’s abandoned running track will help soothe your running-route woes: for there aren’t many other places to run in this tiny town!

For starters, why is it abandoned? The history of Giarre’s abandoned polo track is quite interesting. Essentially, about 40 years ago or so, there were a series of projects started by firms that were never intended to be finished. The idea is to start a project, and then continually get funding from the regional government for it. Once the money dries up, the project is abandoned. Apparently, people would take advantage in this way during the ’70s and ’80s, because Italy had the money to spend at the time. There are currently 160 abandoned projects throughout Sicily, and 360 scattered around Italy as a whole. Near the abandoned polo field, there is a complimenting abandoned Olympic-sized swimming pool that has never seen a drop of water. Also, it’s 49 meters instead of 50. And the polo field is built for 20,000 fans, in a town with a population of 27,000. And there’s only one small lane to access it. Anyways, I digress.

There was a BBC article about how this abandoned running track in Giarre, Sicily was becoming decrepit and “gradually being consumed by the encroaching jungle”. That article was 8 years ago. I was there two weeks ago, February 2020. I’d say it has more of a rainforest feel to it now. Thankfully it’s maintained enough—by someone—to be runnable which is where we’re at now:

What kind of runs can I do?

Normal track workouts, tempos, jogs, etc. It’s a 400m track with 6 lanes, so you can get all of your normal tracky-track stuff done.

The track is a tad rubberized, so it has some give. You’ll be forgiven slightly if you choose to wear flats and knock out some intervals. I would not recommend wearing spikes, as it’s coming apart in some areas and your spikes might catch on something. The interior of the track is a grass field. When I was there, it was thoroughly overgrown with weeds and brush. It was like the bed of a forest. I considered just tramping through the brush anyways because I was in desperate need of soft surfaces, but I decided not to for fear of ticks & Lyme disease. This being said, I assume it’s cut semi-regularly—maybe once a month?—otherwise the vegetation would be much thicker than it was when I went.

How do I get there?

If you’re staying in Giarre, it’s a sinch. If you’re not staying in Giarre, however, then you’ll want to take a train. The town’s train station is called “Giarre-Riposto” and is about 30 minutes from Catania*. The abandoned running track is 1.6km from the train station. Below I’ve linked to the entrance: the southwestern corner. The north and northeast look enterable, but they’re blocked with buildings, overgrown foliage, and/or on private property. I tried, a nice man yelled at me.

I was there in the middle of the day on a Wednesday, and I saw some nice ladies and gentlemen running, I didn’t feel in danger and I don’t think the ladies running felt in danger either. At night though, it probably isn’t the best place to venture to. There’s graffiti, rubbage and such all around the place, and there’s only one main entrance with lots of isolated areas scattered around the complex itself (inside of the stadium, etc). So, it leads me to believe that night time wouldn’t be the safest (for anyone).

Is there a view?

Totally! Mount Etna—an active volcano—is poking her head through on the backstretch.

Being one of two places in all of Giarre-Riposto that are runnable without cars nudging your shins, it easily gets 4 stars. Also, the view of Mount Etna is gorgeous. Having a runnable infield would earn it that extra ⭐️!

If you’d like to see some sexy YouTube track video action, then look no further than just below this paragraph: I did a little update vlog while I was there. You’ll notice there’s a helipad there too! Probably the coolest feature I’ve ever seen attached to a track.

*Side Note: There is an actual track in Giarre—surrounding a football pitch. I tried to go, but when I scampered over there I found it was locked. And by locked, I mean10m high walls, metal gates, padlocks and such. I suppose one could find a way to jump in, but it seems like a bit of risk considering the city seems to be going through a lot of trouble to keep people out. I’m sure there’s a schedule for open-hours out there somewhere, but honestly, I can’t stand dealing with schedules around tracks being open or closed. It’s a rubber oval. Just keep it open all the time…

**Double Side Note: I would recommend booking a car for your trip to Sicily if possible. The trains can get you to all of the major towns, but little nick-nacks like this will be more difficult to visit!