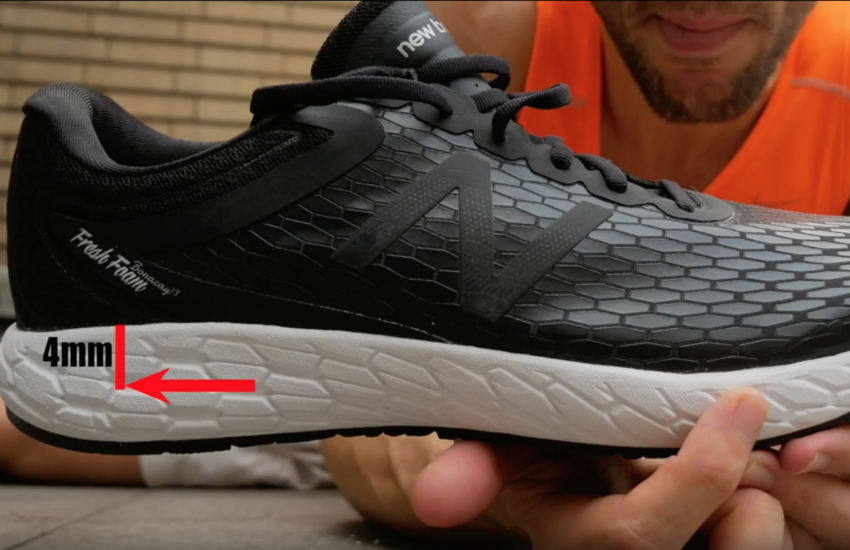 Minimalist running shoes, Low heel drop running shoes, high offset running shoes—what does this running shoe jargon mean? More importantly, does it affect your performance? Can a running shoe with zero drop or low drop help you run faster race times? What do the pros use? Do they care? What is the best running shoe heel drop? If you’ll allow me, I shall address these points in turn. If you’d prefer to have this content in video form feel free to look at my YouTube video below 🙂

Very simply: the distance between where your heel sits from where your toes lie. Measured in millimeters.

As you can see above, this measurement is very minute. So minute in fact that one may think: “Does it really matter?”. Actually, yes. So much in fact, that the difference between a 4mm heel drop shoe and 10mm heel drop shoe can feel quite significant. For example, let’s say you train in the 4mm drop running shoes pictured above. You train in them for a few months, put in a few hundred MI/KM, and become comfortable with them. Then, one day you throw on a 10mm high-drop shoe and go for a jog. It would feel like stepping into ladies’ stems.

For buying reference, typically when buying a shoe, they will have the details listed near the weight. “Stack height” or “Offset” might also be used instead of “Drop“.

If you weren’t looking before, it’s a measurement you can now be aware of when buying running shoes. Lovely.

A Millimeter of History

So, now we’re aware of this seemingly arbitrary shoe measurement—so fastidious it’s measured in millimeters—why is this even a knowledge point? The history is interesting, but I’ll keep it brief:

Up until the ’70s, most running shoes were zero-drop or thereabouts. Sometime in the 80s—probably due to Bowerman’s 1977 novel Jogging which sparked America’s running boom of the 80s—more cushioning was introduced to the heel so that the impact of running on hard-surfaces wasn’t so dramatic. Bowerman was also conveniently the co-founder of Nike. So, cushioned shoes were introduced to more effectively allow a greater number of people to run without issues. Of course not every shoe was a high-drop pillow-cushion; people still raced in flats and such. It’s just that starting in the 80s, high-drop cushioned shoes came into existence.

Fast forward to 2009. The international scene is being dominated by Kenya and Ethiopia. In the 2008 Olympics, American hopeful Galen Rupp places 13th at the 10,000m. Marathoners Ritz and Hall place 9th and 10th, respectively. It is, in effect, the dark ages of western distance running. But then—when all hope seems lost—a perfectly timed ray of light pierces through the shadows: Christopher McDougal’s book, Born to Run. A tribe of people in a Mexican canyon that run 50 miles(80km) per day wearing nothing but rubber sandals. Could this be the salvation the western world is looking for? Going back to our “natural” roots? And thus, the barefoot movement is born: cue Vibram Five Fingers, minimalism, and our “natural” running form. Back to zero-drop running shoes, they say. Cushioning is BAD, they say. We were better runners in the 60s, they say! And so now, we’ve arrived*.

*I hope you enjoyed my overly dramaturgical history, I wanted to give it some flair 🙂

And so now the most pertinent question: will wearing a low-drop or minimalist running shoe help you run faster? My YouTube video below has a bit of detail on it, but the argument can be broken down into these premises: 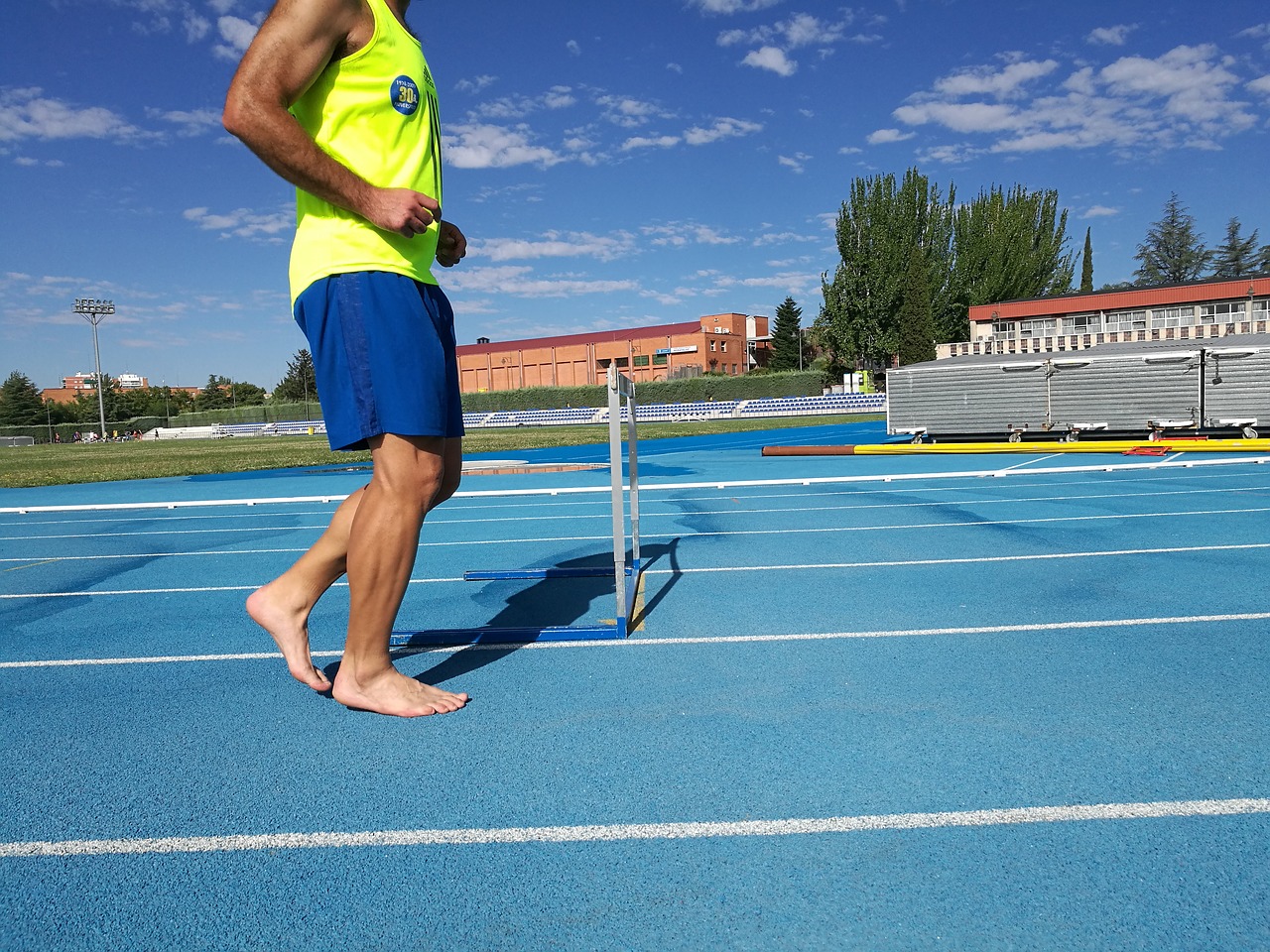 Is there any research or proof to validate this?

Here are some relevant studies I came across:

This looks amazing, except that, “79% of the improved economy accounted for by reduced shoe mass.” So simply put: the shoes were lighter, which is why running economy improved.

2. This study found: “In conclusion, RE was not significantly different across barefoot, minimally shod, and standard shoe conditions in a group of recreational distance runners while running at low and moderate intensities.” The jist of the study was that runners would find the stride most efficient for them, given different shoe types.

3. Over 6 months (or 500km, whichever came first): “Thus, shoe drop of standard cushioned shoes does not seem to influence running biomechanics in the long term.”

4. “Barefoot running or running in minimalist may require lower utilization of oxygen than shod running.” Except more than half of the runners in this study had experience with barefoot running, and so the results may not apply to those who are transitioning from traditional shoes to minimal shoes. There was also a high risk of bias reported in the study.

5. Another study found, “although not statistically significant, training in Minimalist Footwear compared to Conventional Running Shoes resulted in small to moderate improvements in Running Economy.”

**From the injury reduction point of view:

6. Heel impact force was reduced when switching to a midfoot strike

7. “Low-drop shoes [6mm and 0mm] were found to be associated with a lower injury risk in occasional runners”

If you reduce the weight of your running shoes, you will mostly likely improve your running economy. The physics of the leg-swing pendulum tell us so: if the next shoe you buy weighs significantly less than your usual shoe, your legs will swing faster, you’ll have a higher stride rate, and running economy will improve. Just run around barefoot on the grass for a few minutes and see how quick your little feetsies move. Minimalist shoes tend to weigh less than their traditional counterparts—but does the running shoe heel drop improve running economy? Sorry to say, but unless you focus on the landing of the foot while running, then probably not.

Research on how to change running mechanics found that it’s an active process, and not a passive one.

There needs to be immediate feedback given to the athlete while they are running, so that the athlete can then focus on correcting the problem on the spot. One needs to actively think and concentrate on one’s form while running in order to make changes to it; you can’t just throw on some different shoes and hope that your body will immediately change the way it moves. Running style is resistant to change.

When combing through the research, it became obvious that a midfoot and forefoot strike helped reduce heel impact force by decelerating the heel. The heel will always touch the ground when running (except for sprinting), but a shoe with a lower offset will help slow the acceleration of the heel into the ground. Of course, then, the forefoot/shank of the foot would have a higher acceleration. Typically a pronounced heel strike means that the leg is straighter & more extended. It also usually means that the stride rate/cadence is lower than optimal (<170spm). These two factors combined mean that the ankles, knees, and hips will have more impact time to deal with.

Though, please note that this isn’t always the case! There are quite a few professional runners who land with a heel strike—just watch any major marathon—and landing with a heel strike does not guarantee injury. It greatly depends on that specific runner’s mechanics.

What do the pros use?

Speaking of professional runners, what do most use? If you’ve ever watched a track race, you’ll immediately see that the runners are wearing little slippers with spikes on them. They are zero drop shoes with teeth, low weight and ready to fly. It makes sense too: the longest Olympic race on the track is 10,000m and the runners are running 4:20/mi (2:43/k)…they can’t have excess shoe slowing them down.

What about longer races?

Take a look at the start of the Olympic Marathon above: all of those lime green shoes were Nike’s unreleased prototype of the Vaporfly 4%—this is in 2016, before all of the drama—they had a 10mm heel drop. The best marathon runners in the world were in the race of their life, repping shoes with a 10mm offset.

What about shorter road races?

What about daily trainers?

So, do I need running shoes with a lower heel drop?

The conclusion that I’ve come to—as I did in my YouTube video below—is that it’s entirely down to your preference. The runner makes the shoe, not the other way around. You could throw a dozen different types of shoes on Galen Rupp, and he’d still be an amazing runner.

I’ve run 2:49 for the marathon, which isn’t miraculous, but it does mean I know my body relatively well enough to decide what works with it and what doesn’t. Over the past 15 years, one thing I’ve personally had to consider is my feet: they are large. Size 14US or 49EU. That means my feet are heavy. So I need to make sure my shoes are as light as possible, yet with enough cushioning so that I can jog around Paris without concern. I also need to (try) and land with a midfoot strike. This is because years ago, I developed several stress fractures due to a) my gigantic heel thwacking into the ground and b) a slower stride rate from my gigantic feet-boat-shoes that massively slowed down my turnover. What works best for me is a daily trainer that’s never more than 6mm offset, and racing shoes that are almost always 4mm.

I’ve always thought it makes sense that if I’m racing a shorter race, a low drop shoe will probably be more complimentary to my performance. A lower-drop shoe will make it easier for me to keep on my midfoot/forefoot, so long as I focus on it. With a higher drop shoe, it requires more focus for me to stay off of my heel. But that’s just the way my mechanics are.

I’ve done two marathons in shoes with a 6mm heeI drop, and my footstrike and turnover were both fine. I couldn’t find a racing flat cushioned enough for the marathon, yet lower than 6mm. A lower heel drop often means less cushioning. That being said, the one company that seems to be giving this area some focus is Hoka One One. I’ve done about 450 miles in the Hoka One One Clifton. It’s a very cushioned shoe, yet only has a 4mm offset. It’s too bulky to race in, but it’s worked great for me as a daily trainer on the roads.

I hope you’ve enjoyed and benefitted from this post.; I’ve noticed there’s a lack of researched information and practical considerations compiled together, so I thought I would share. Check out my YouTube video below if you’d like some visuals to go with the text! 🙂